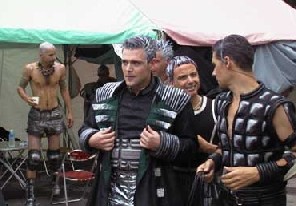 Rammstein was started by Richard Z. Kruspe-Bernstein. In 1989 he escaped from East Germany over the border between Austria and Hungary. He eventually ended up in West Berlin and started a band in 1993 (Orgasm Death Gimmicks). At that time he was very influenced by American music. After the wall came down, he moved back home to Schwerin where Till Lindemann (the singer of Rammstein) worked as a basket weaver and played drums in the band First Arsch.

At this time, Richard lived with Oliver Riedel (of the band The Inchtabokatables) and Christoph Doom Schneider (of Die Firma). Richard realized that the music he had previously made was not right for him. He envisioned something with machines and hard guitars together. The three started working together on a new project.

Richard soon found it hard to write music and lyrics at the same time. He got Till to join them as he had often heard him singing while working. A contest for new bands was announced and the prize was studio time. The four of them recorded the first Rammstein demo and won. Paul Landers knew them all and wanted to know what they were doing. After listening, he agreed to join. At this point, all they needed for the machine-sound was a keyboarder. They tried to get Christian ‘Flake’ Lorenz to join, as he had played with Paul before in the band Feeling B. Flake was not entirely thrilled with the idea at first and didn’t want to join for a long time. But, he eventually agreed. 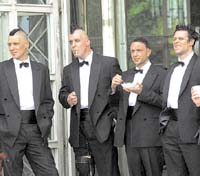 About the time the band was formed, they all had relationship problems which provided the foundation for their debut album Herzeleid (Heartache) in 1995. Since then, they have reached gold and platinum status for their music and have become Germany’s number one music export.

They took their name (adding an ‘m’) from the location of a German tragedy where 80 people were hurt and killed as the result of a crash during an American Air Force flight show (video). The literal translation of ‘ram stein’ is a battering ram made of stone.

Rammstein have not been shy of courting controversy and have periodically attracted condemnation from morality campaigners. Their stage act earned them a night in jail in June 1999 after the infamous giant dildo was used in a concert in Worcester, Massachusetts. Back home in Germany, the band has faced repeated accusations of fascist sympathies due to the dark and sometimes militaristic imagery of their videos and concerts, including the use of extracts from a propaganda film by Leni Riefenstahl in the video for Stripped. Also, when the album Herzeleid originally came out in Germany in 1995, they were met with accusations from the media and critics that they were trying to sell themselves as ‘poster boys for the Master Race’. Rammstein have denied this vigorously and the members of the band have said that they want nothing to do with politics as well as supremacy of any kind. The song Links 2 3 4 was written as a riposte to these claims. According to Kruspe, it means, ”my heart beats on the left, two, three, four.’ It’s simple. If you want to put us in a political category, we’re on the left side, and that’s the reason we made the song.’ (The Grand Rapids Press, Jul. 22, 2001). Of course this is a two-sided thing, since ‘Links 2 3 4’ is the usual command in marching practice in the German army, ‘Links’ referring to the left foot in that case.

In April 1999, it emerged that Eric Harris and Dylan Klebold – the two boys who perpetrated the Columbine High School massacre – were fans of Rammstein and had declared it to be one of their favourite bands. Rammstein came under heavy criticism from conservative and Christian groups in the United States, who claimed (among other things) that Till Lindemann’s rolling Teutonic r’s were an imitation of Adolf Hitler’s diction. In response, the band issued a statement:

The members of Rammstein express their condolences and sympathy to all affected by the recent tragic events in Denver. They wish to make it clear that they have no lyrical content or political beliefs that could have possibly influenced such behavior. Additionally, members of Rammstein have children of their own, in whom they continually strive to instill healthy and non-violent values. 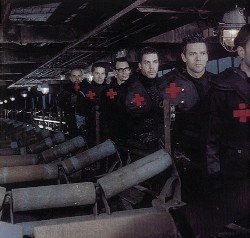 Jeff Weise of the Red Lake High School massacre was also said to have been a fan.

Following the tragic conclusion of the Beslan school hostage crisis in Russia in September 2004, the Russian authorities claimed that the hostage-takers had listened to German hard rock group Rammstein on personal stereos during the siege to keep themselves edgy and fired up. The claim has not been independently confirmed, and the Russian authorities are known to have been concerned that Rammstein was too appealing to ‘undesirable’ elements in Russian society. A Rammstein concert in Moscow scheduled for July 19, 2002 was cancelled due to fears that it would attract skinheads.

In October 2004, the video for Mein Teil caused considerable controversy in Germany when it was released. It takes a darkly comic view of the Armin Meiwes cannibalism case, showing musicians of the band being held on a leash by a transvestite and rolling around in mud. The controversy did nothing to stop (and may even have helped) the single rising to No. 2 in the German charts.

The band’s own views of its image are sanguine: ‘We like being on the fringes of bad taste,’ according to Paul Landers, while Flake Lorenz comments: ‘The controversy is fun, like stealing forbidden fruit. But it serves a purpose. We like audiences to grapple with our music, and people have become more receptive.’ (The Times, Jan 29, 2005)

The band’s album Rosenrot, was released on October 28, 2005. A number of songs that were left out of Reise, Reise for dramaturgical reasons make up the majority of the album, but a number of new songs have also been recorded. The band performed “Benzin”, the first single from the album, at four shows in Wuhlheide Park on June 23-26, 2005, and four shows in the UK (Newcastle, Birmingham, Glasgow and Cardiff) in July 2005.

The band took a time out in 2006, and began work again in 2007. In an interview with German rapper Bushido (who contributed the “Electro Ghetto remix” of “Amerika”) on 21 January 2007, Bushido reported recording a song with Rammstein, called “Vergiss uns nicht” (“Don’t forget us”). In this interview, Bushido also mentioned that he was unsure whether it would be on their “Best of” album or not. This was the first mention of a “Best of” album, or the new album all together. On May 6, Rammstein announced European tour dates on their website.

In addition, keyboardist Christian “Flake” Lorenz confirmed this in an interview with Metal Hammer Germany in November, stating that they would have most likely released a new album in 2008. The band did not tour during 2007 due to album production. Their website confirmed work on a new album, but no word of a “Best of” album has yet been mentioned. In January 2008, guitarist Richard Kruspe confirmed on the Talking Metal Podcast that Rammstein was recording an album as they spoke, during that same interview he confirmed a “big world tour” following the next album to contain U.S. dates.

On 4 November, the band finished the pre-production in Berlin and went to the Henson Studio in LA. After 7 intensive weeks they had recorded the drums, guitars and most of the vocals.

Two very short (less than two minutes) “making of” videos have been released during the development of the album. One video, released on the band’s website, shows drummer Christoph “Doom” Schneider recording drums for one of the tracks (“Mehr”), and the second, released on the band’s MySpace page, features keyboardist Flake Lorenz practicing notes for another track.

The June ’09 release of Metal Hammer featured an interview with Rammstein-manager Emanuel Fialik. In regard to the upcoming album Fialik quoted “Musically, it has the force of Mutter while the beauty of the melodies of Sehnsucht – Just so it has fixed in my ears.” and also that it will feature two soft ballads and the rest will be “hard as a rock”. He even went as far to say that the disk is the biggest surprise since the birth of his son. The interview concluded with Fialik stating “It is musically the best Album, which until now has Rammstein recorded!”

In July 2009, the title track “Liebe ist für alle da” leaked onto the internet, along with promotional materials. This has led Universal Music to take action against certain fan sites.

It was confirmed in August 2009 that the new album will have 11 tracks, and mixing of the album — which was taking place in Stockholm – has been completed. On September 1, 2009, it was confirmed on the band’s website that “Pussy” will be the first single from the new album. On the same day, The Gauntlet posted a promotional video for it. The video also confirmed the new album title, Liebe ist für alle da. Later, the title was confirmed again in an interview with Paul Landers for RockOne magazine.

The music video for “Pussy” was released on September 16, 2009, at 20:30 GMT, released especially for the adult website Visit-x. The video contains graphic scenes of male and female nudity as well as women engaging in sexual activity with the band members, although the actual sex scenes were performed by body doubles. Metal Hammer released an edited version of the video onto their website.

“Ich tu dir weh” has been confirmed as the second single off the album by Paul and Flake, in a recent interview for Radio Eins. Although censorship of the song in Germany prohibits any advertisement, broadcast or public display, the video to “Ich tu dir weh” was released on December 21, 2009 on the adult website Visit-x, just like the video to “Pussy”, after advertisement on the band’s official German website; it depicts the band on stage in a similar configuration as the one on their 2009/10 tour. Any references to the video on the official website have since been deleted. In Europe, the single has been released on January 15, 2010, and in the U.S. on January 19, 2010.

It has been confirmed that Rammstein will play for the 2010 Rock AM Ring Festival. The days they will be are not known as of now. In addition to this, it was also confirmed that Rammstein are to play their first UK festival performance headlining 2010’s Sonisphere Festival, co-headlining along with Iron Maiden.
According to an interview conducted with Paul Landers on December 24, the next video will be for “Haifisch”. Unlike a straight performance video like “Ich tu dir weh”, “Haifisch” will have a story behind it. Also, he stated in the interview that Rammstein hopes to be back touring North America in the fall of 2010.