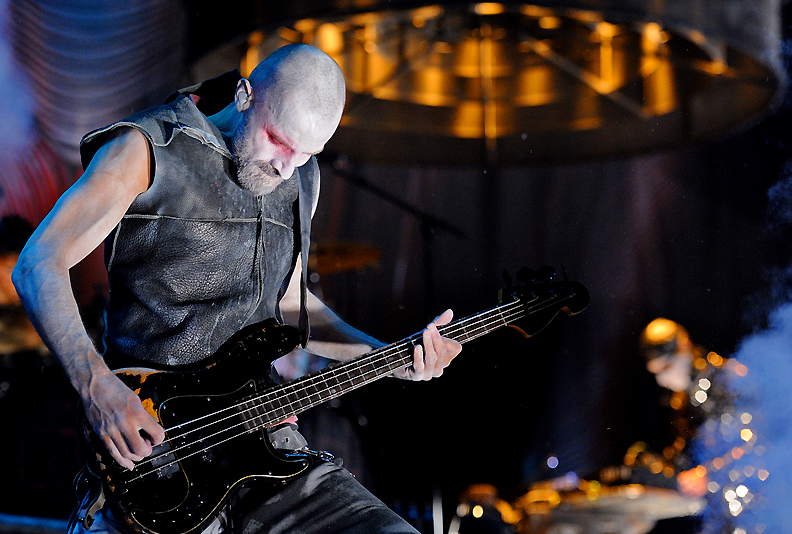 Oliver Riedel played in old band ‘The Inchtabokatables’ (Bassist). Has a girlfriend, has never married, has no children. Both his brother and father have died. He likes to skate. Oliver likes electronics. He’s played bass for over 25 years. Is very fluent in English and German.

Oliver Riedel was born on April 11, 1971 in Schwerin as an only child. Little known is about his early and teenage years.

He was trained as a plasterer after leaving school.

In 1990, at the age of nineteen, Oliver began playing in a folk-fiddle band called The Inchtabokatables.

The six released their first album, Herzeleid (Heartache) in September, 1995. Their second album, Sehnsucht (Longing) was released in 1997.

In April 2001, the album Mutter (Mother) was released and a European tour followed, ending on the 13th of July 2002. It has been reported that at this time the members of Rammstein were seriously discussing whether to continue or not in their present form. It was decided that
they should all take some time off and then reconsider whether to continue. In 2003, Rammstein started work on the fourth album, which was to prove a turning point in Rammstein’s sound and maturity. September 2004 saw the fruits of this work in the release of Reise Reise (Travel, travel). Tour was in November, followed by hugely successful sold out European tour of ten countries lasting four months.

After completing the Ahoi tour in February of 2005, Rammstein is due to play four dates in Berlin, and four in the UK, returning to the Wuhlheide open air arena almost exactly seven years after their sell-out concerts of August 1998. Rammstein are scheduled to release a new album (Rosenrot), containing new songs and songs remaining from the recording of Reise Reise, in late 2005 or early 2006.

He has two children, one of whom is a girl called Emma, and is divorced from her mother. His current marital status is unknown.

He likes photography and sports, especially skateboarding and surfing. It has been said he is the most computer literate member of the band.

On the separation rumours

“We never wanted to, but after Mutter we had some difficult times because the third album is the most difficult one and we had a lot of pressure on us. We also had our differences between the group members and everyone’s expectations were different. We took a year to rest, and after that we realize that we wanted to be together and to go on.”

On his early family life

Interviewer: Did you have a lot of problems with your parents?

Ollie: Not a lot at all. My parents are quite young, which is good. Because the age difference isn’t that big, we had it good with each other. My father and mother also liked the same music as me. We were almost more like friends than family.

Interviewer: But of course you did tease your brothers and sisters…

Ollie: No, because I don’t have any, too bad. But if I would have had them, I would definately have teased them!