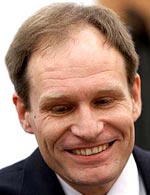 Who is Armin Meiwes:

Armin Meiwes (born 1961 in Germany) is a cannibalistic internet user who became known as the “Rotenburg Cannibal” or “Der Metzgermeister” (The Master Butcher). Meiwes posted an advertisement on the Internet, looking for a willing victim. Bernd Jürgen Armando Brandes replied to his posting, and they arranged to meet so Meiwes could kill and eat Brandes.

The song Mein Teil by German band Rammstein was inspired by the case. Teil meaning part or piece, and can also be used as slang for penis, which means the song would translate into my part or my penis. DUring life performances the band singer Till Lindemann act Meiwes when he holds a knife and cooks Flake Lorenz in a big pot usin a flamethrower.

Armin Meiwes is a cannibalistic internet user who became known as the “Rotenburg Cannibal” or “Der Metzgermeister” (The Master Butcher). Meiwes posted an advertisement on the Internet, looking for a willing victim. Bernd Jürgen Armando Brandes replied to his posting, and they arranged to meet so Meiwes could kill and eat Brandes.

As is known from a videotape the two made when they met in March 2001 in Meiwes’ home, Meiwes amputated Brandes’ penis and Meiwes and Brandes ate the penis together before Brandes was killed. Brandes had insisted that Meiwes would bite his penis off, but this did not work, so Meiwes used at first a knife that turned out to be too blunt, and then a sharper knife to finally slice the penis off. Brandes apparently tried to eat his share of his own penis rare, but could not because it was too tough and as he put it, “chewy”. Meiwes then sautÃ©ed the penis in a pan with salt, pepper and garlic.

According to journalists who saw the video (it has not been made public), Brandes may already have been too weakened from blood loss to actually eat his share of the penis. Meiwes apparently gave him large quantities of alcohol and pain killers, and then killed him in a room that he had installed in his house for this purpose. He ate the body over the next few months, storing parts in his deep freezer.

Meiwes was arrested in December 2002, after apparently posting new advertisements for victims on the Internet. Investigators searched his home and found body parts and the videotaped killing. The video is apparently so disturbing that many of those who saw it sought psychological counseling.

In April 2005, a German court ordered a retrial after prosecutors appealed his sentence. They believed he should have been convicted of murder, not manslaughter, and given a life sentence. Among the questions courts answered is whether Brandes agreed to his killing, and whether he was legally capable of doing so at the moment of killing, taking into account his apparent mental problems as well as his significant intake of alcohol and drugs. Other aspects of the retrial determined whether Meiwes killed to satiate his own desires (in particular sexual desires), and not because he was asked to, a claim that Meiwes has repeatedly rejected during testimony.

At his retrial a psychologist claimed that Meiwes could reoffend and still “had fantasies about devouring the flesh of young people”. On 9 May 2006, a court in Frankfurt convicted Meiwes of murder and sentenced him to life imprisonment.

A similar Internet-mediated consensual homicide is the 1996 case of Sharon Lopatka, who sought and found a male (Robert Frederick Glass) who would torture and kill her by strangling her to death.