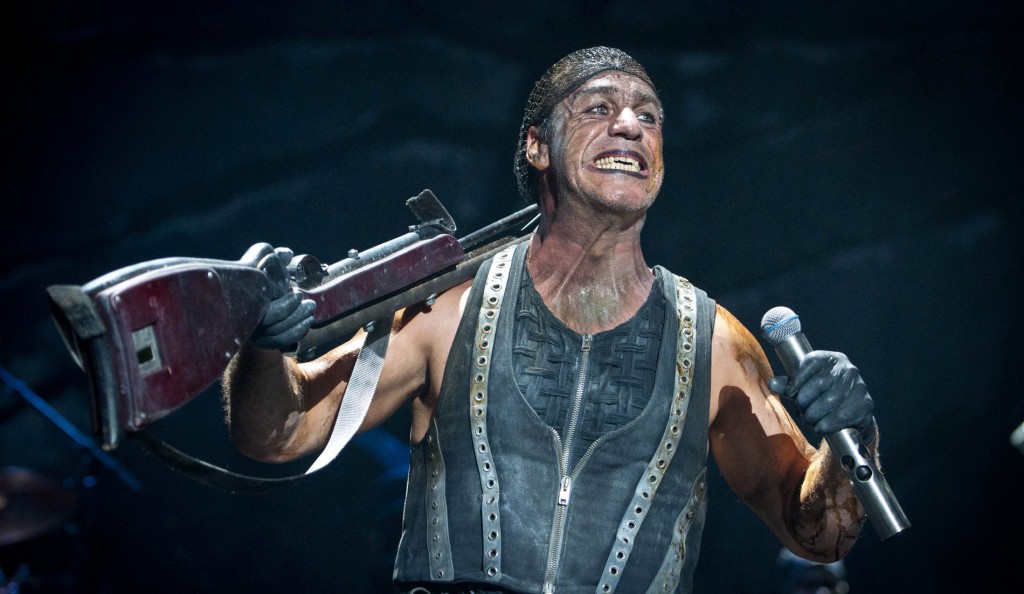 Before Rammstein he ran his own business in Berlin

Used to be a youth-champion swimmer

Has two daughters – Nele from his first marriage, Marie Louise from his relationship with Anja Koesling.

Grew up with his mother, Gitte, father, Werner and a sister six years younger.

His mother has recently retired from journalism and his Father, now deceased, was a poet.

Till’s parents divorced when he was just 12.

Has recently completed signings of his book “Messer” in Germany.

Ordered to pay a total of DM1200 in damages by a court in the city of Dresden (Germany) to ex girlfriend Anja Koesling, after her allegations of an incident involving herself and Till at a hotel in October 1997. It was reported that he punched her in the nose. His lawyers and himself have refused to make any comment on the subject.

Last name is misspelled as “Lindermann” on the American version of the group’s “Sehnsucht” album.

His father died in November of 1992, after drinking himself to death and was buried in the grounds of a church near Wendisch-Rambow.

He lives in Berlin-Prezlauer Berg, on the top floor of an appartment block in a unit lined with windows.

Refused to do military service and almost went to prison for his actions.

Till Lindemann was born in Leipzig, but he grew up in the village of Wendisch-Rambow in Schwerin (East Germany). His father, Werner Lindemann, was a poet, and his mother, Brigitte
(Gitta) Lindemann, is an artist and writer who has co-written at least one book with her husband. Till Lindemann has one sister, six years younger than himself. At age 11 he went to a sports school at the Rostock Sports Club, and from 1977-1980 attended a boarding school. His parents divorced in 1975, when he was age 12.

In the years 1976-1979, Lindemann was a good swimmer who became junior vice-European
champion. He finally left sports school in 1979. It is possible that he was thrown out of sports school due to him sneaking out, unaccompanied, of a hotel in Italy on a swimming tour. But he also suffered an injury, a torn abdominal muscle – so either reason could be valid. According to Lindemann, “I never liked the sport school actually, it was very intense. But as a child you don’t object.”

His first job was at a peat cutting company, but he was fired after three days. He worked as an apprentice carpenter, a gallery technician, and was most well-known as a basket weaver.

In 1981, Till Lindemann apparently refused to do his 9 months compulsory military service and was almost imprisoned because of the refusal. Many young men used to do “Ersatzdienst” or “substitute or reserve service”, so he may have done this.

In 1985, when Lindemann was 22, his first daughter, Nele, was born. Lindemann and Nele’s mother married after she was born, but they separated and he has raised Nele alone. Lindemann says, “I used to play drums in a punk band and we had our studio in the house where I lived. Seven years I had been a father raising his daughter, but nowadays I’m sharing the upbringing with her mother, because I’m gone for six months of the year with the band.”

The Berlin Wall came down November 9th, 1989, and Germany started its path to reunification. On this, Lindemann says, “After the wall had been opened, I drove to West Germany and bought gummy bears and yogurt for my salutation money. But there wasn’t anything else.”

His father died in November of 1992, of the effects of alcohol. He was buried in the grounds of a church near Wendisch-Rambow.

Lindemann had a second daughter with Anja Köseling, his former partner/wife. Köseling claimed Lindemann abused her physically during their relationship and that he refused to pay child support for their daughter, Marie-Louise (b. ca. 1993). Lindemann has never commented on her claim.

In a radio interview in 2004, Lindemann stated that he wants to retire at 50 to spend more time with his children.

At a performance in Sweden in 2005, he received a knee injury on stage when keyboardist Flake accidentally ran into him while riding a Segway PT. This injury caused several tour dates in Asia to be cancelled. In 2005, five Rammstein albums received platinum awards and the band also received the “World Sales Awards” for over 10 million sold copies worldwide. During the filming of the band’s music video for “Ich tu dir weh”, Lindemann wanted a light put in his mouth to create a visually stunning effect. Band mate Paul Landers suggested that he use a flesh colored wire and run it along his cheek to shine a light into his mouth from the outside. Lindemann refused, and instead opted to have a surgical incision in his left cheek, so that a light could be fed into his mouth directly, and largely out of sight.

There is a specific performance move of Lindemann’s, dubbed “The Till Hammer”. This move is where he bends his knees, beats one fist off his thigh in a hammering motion while turning his head from side to side. On occasion, Flake has been seen to parody the move on-stage. Unlike most band frontmen, Lindemann stated in an interview that he does not like being looked at while on stage, where he would wear sunglasses. He also opts to look at the back to the mixing booth, or does hand gestures during guitar solos to distract the audience from looking directly at him. Due to his on-stage anxiety, Lindemann sometimes asks his band mates to use a rubber dinghy to crowd surf during shows, as it gets the audience’s attention away from the stage temporarily. In 2011, Roadrunner Records listed Till Lindemann at number 50 of The 50 Greatest Metal frontmen of all time. In 2013, Lindemann’s second poetry book, In stillen Nächten was published. He commented on the poetry, saying “The vast majority of my poems could have been written a few hundred years earlier.”

In a 2011 interview, Lindemann has stated he still has strong connections to traditions of East Germany. He finds that “de-traditionalisation” is disturbing, and stated there is also no authenticity anymore. In 2014, Lindemann presented two sculptures and his original scripts of poems in his book In Silent Nights in a gallery in Dresden. Lindemann has also written some lyrics in 2014 for German schlager singer-song writer Roland Kaiser for his album Soul Tracks. Lindemann has stated that he “hates noise”, and would often go to a village in the north between Schwerin and Wismar.

In 1986, he started to play drums for First Arsch, also known as “First Art”: a play on words perhaps meant to distract the authorities. It was a Schwerin-based punk band. They made one album titled Saddle Up.

Later in the 1990’s, Lindemann began to write lyrics, possibly based on phrases and words from poems that he was beginning to write. He says he “used to drum in a punk band that consisted of bass and drums. We used to work with guest-guitarists, usually Paul Landers and Richard Kruspe. We did a short tour where I changed instruments with the bassist in the encore, that was such a success, that Richard insisted on starting a project in which I would sing. Other people joined the band but only
when I left Schwerin for Berlin did it take serious form.”

In 1994, they entered and won a contest in Berlin that allowed them to professionally record a four track demo. Till Lindemann moved to Berlin. Paul Landers formally joined the band, followed by the last member to join, Christian ‘Flake’ Lorenz.

It’s well documented that all the band members had women problems about the time Herzeleid was written, and this appears to have provided Lindemann with excellent writing material. Herzeleid was finally released in September 1995. Two years later, in August 1997, the band’s breakthrough album, Sehnsucht, was released.

On June 5, 1999 in Worcester, Massachusetts (USA) Till Lindemann and Flake Lorenz were arrested and charged with lewd and lascivious behavior. A statement from Sgt. Thomas Radula
of the Worcester Police Department stated that Lindemann was simulating sex with Flake onstage “using a phallic object that shot water over the crowd.” They were held and released the following day on $25 bail. After months of legal debate, they were eventually fined 100.

Consequently, in November 2002 Lindemann’s own project, the poetry book Messer, was published. It consists of 54 poems compiled by Gert Hof, who is author of the book Rammstein and has been the band’s pyrodesigner for the last seven years. This book is due to be re-printed in 2005 due to a campaign by a fansite

In 2003 he started work on the fourth album, which was to prove a turning point in Rammstein’s sound and maturity. September 2004 saw the fruits of this work in the release of Reise Reise. As of 2005, Lindemann continues to work with Rammstein. As stated previously in various interviews, the loss of Till Lindemann, or any other band member, will be the end of the band proper.

Rammstein are scheduled to release a new album (Rosenrot), containing new songs and songs remaining from the recording of Reise Reise, on November 7th, 2005.

Till Lindemann picture gallery
1 of 11