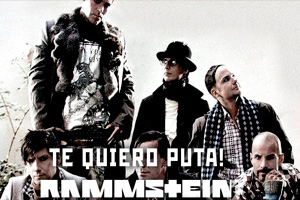 “Te quiero puta!” (I want/love you, whore!) is notable for being Rammstein’s first and currently only song in Spanish. It is the only song in which Rammstein has predominantly used a trumpet, though Benzin and Rosenrot both use a trumpet, and one can be scarcely heard during Klavier’s bridge. The song itself is a combination of the band’s usual loud heavy-metal attack and mariachi music. Till Lindemann’s love for Hispanic culture was the main inspiration for the song’s style, because as he claims, “In South America it is more open surfaces. And the music with the warm-blooded rhythms one can dance to. And the women…” (“Closeup”, September 2005). He wrote the lyrics to the song together with his girlfriend, who speaks fluent Spanish. The Spanish vocals are sung by Carmen Zapata.