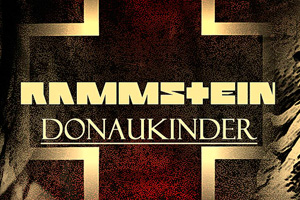 The song deals with an accident near Baia Mare, in Romania, which occurred on 30th Januar 2000.

Extremely heavy rainfall on 30 January caused a dam to breach, causing 100.000 m³ of water to flood a goldmine and carry with it app. 100 ton of heavy metals and sodium cyanide into the nearby river Donau (German name for the Danube). The poison was carried along the river, causing havoc in several countries; drinking water became poisoned, and people fled the rivers’ surroundings to escape the deadly poison, which quickly destroyed all life in and around the river itself.

Lots of children were obviously affected by this disaster, but the name ‘Donaukinder’ (‘Danube Children’) more probably refers metaphorically to the fish in the river, seen as the ‘children’ of the Danube/Donau; the fish obviously suffered most directly the full force of this disaster and the absence of fish in the river is the most obvious consequence of the disaster. Hence, the song rhetorically asks: ‘Wo sind die Kinder?’ (‘Where are the children?’). Furthermore, the German name for Baia Mare, where the breach occured, is ‘Frauenbach’, meaning ‘Woman-River’, which sustains the metaphor of comparing River/Fish to Mother/Children.