Home All about flames during Rammstein concerts & flammable materials

All about flames during Rammstein concerts & flammable materials

It is very dangerous to deal with fire. Rammstein (Till Lindemann) have special certification to perform all the stunts. DO NOT try to imitate them, you could seriously hurt yourself or other people. This page is supposed to tell you more about fire, educate you and WARN you 🙂 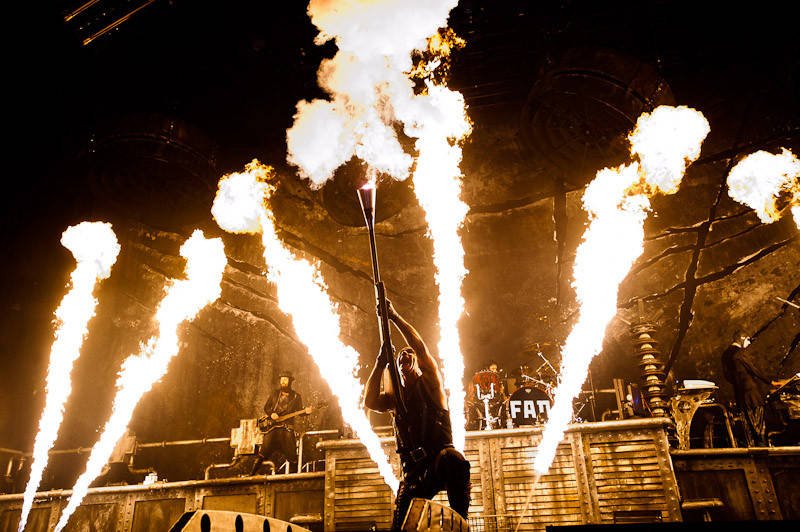 Flammability is the ease with which a substance will ignite, causing fire or combustion. Materials that will ignite at temperatures commonly encountered are considered flammable, with various specific definitions giving a temperature requirement. The flash point is the important characteristic. Flash points below 100 Â°F (37.8 Â°C) are regulated in the United States by OSHA as potential workplace hazards. Examples of flammable liquids are gasoline, ethanol, and acetone. Diesel fuel is in one of the less heavily regulated flammability categories, and biodiesel is considered nonflammable with a flash point usually over 300 Â°F (150 Â°C) even though biodiesel will combust inside a diesel engine.

The word flammable is of relatively recent origin but has in many contexts, especially safety, taken the place of the word inflammable, an older term with the same meaning. Some find inflammable misleading, falsely concluding that the Latin prefix in- (here an intensifier) always means ‘not’. Hence, gasoline trucks will doubtless continue to be labelled flammable, while for those in internet circles inflaming someone will continue to have a very different meaning from flaming them.

The flash point of a flammable liquid is the lowest temperature at which it can form an ignitable mixture with air. At this temperature the vapor may cease to burn when the source of ignition is removed. A slightly higher temperature, the fire point, is defined at which the vapor continues to burn after being ignited. Neither of these parameters is related to the temperatures of the ignition source or of the burning liquid, which are much higher. The flash point is often used as one descriptive characteristic of liquid fuel, but it is also used to describe liquids that are not used intentionally as fuels.

Petrol (gasoline) is designed for use in an engine which is driven by a spark. The fuel should be premixed with air within its flammable limits and heated above its flash point, then ignited by the spark plug. The fuel should not preignite in the hot engine. Therefore, gasoline is required to have a low flash point and a high autoignition temperature.

Diesel is designed for use in a high-compression engine. Air is compressed until it has been heated above the autoignition temperature of diesel; then the fuel is injected as a high-pressure spray, keeping the fuel-air mix within the flammable limits of diesel. There is no ignition source. Therefore, diesel is required to have a high flash point and a low autoignition temperature.

The fire point of a fuel is the temperature at which it will continue to burn after ignition for at least 5 seconds. At the flash point, a lower temperature, a substance will ignite, but vapor might not be produced at a rate to sustain the fire. Fire point and autogenous ignition are additional considerations when selecting fire resistant greases. You can search for a term paper saying that industrially, fire point is the lowest temperature at which industrial greases produce sufficient vapors to form a mixture in air that continuously supports combustion after ignition.

Combustion or burning is a chemical process, an exothermic reaction between a substance (the fuel) and a gas (the oxidizer), usually O2, to release heat. In a complete combustion reaction, a compound reacts with an oxidizing element, and the products are compounds of each element in the fuel with the oxidizing element.

In most cases, combustion uses oxygen (O2) obtained from the ambient air, which can be taken as 21 mole percent oxygen and 79 mole percent nitrogen (N2).