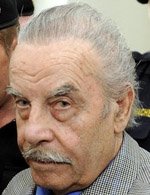 He was charged with incest, rape, coercion, false imprisonment, enslavement and the murder of an infant.

On the album “Liebe ist für alle da” the song called Wiener Blut (Viennese blood) was inspired by the Fritzl case (after Armin Meiwes case this is the second famous deviant appearing in a Rammstein song).

The Fritzl case emerged in April 2008 when a 42-year-old woman, Elisabeth Fritzl, (born 6 April 1966), stated to police in the town of Amstetten in Austria that she had been held captive for 24 years in a concealed part of the basement of the family home by her father, Josef Fritzl (born 9 April 1935), and that he had physically assaulted, sexually abused, and raped her numerous times during her imprisonment. The incestuous relationship forced upon her by her father had resulted in the birth of seven children and one miscarriage.

Three of the children had been imprisoned along with their mother for the whole of their lives: daughter Kerstin, aged 19, and sons Stefan, 18, and Felix, 5. One child, named Michael, had died of respiratory problems three days after birth, having been deprived of all medical help; his body was incinerated by Josef Fritzl on his property. The three other children were raised by Fritzl and his wife Rosemarie in the upstairs home. Fritzl had engineered the appearance of these children as foundlings discovered outside his house: Lisa at nine months in 1993, Monika at ten months in 1994, and Alexander at 15 months in 1997. When the eldest daughter, Kerstin, became seriously ill, Josef acceded to Elisabeth’s pleas to take her to a hospital, triggering a series of events that eventually led to discovery.

Josef Fritzl was arrested on 26 April 2008, aged 73, on suspicion of serious crimes against family members and went on trial in Sankt Pölten, Austria on 16 March 2009. He was charged with incest, rape, coercion, false imprisonment, enslavement and the murder of the infant Michael. After a four day trial from which the public and the media were largely excluded, he was sentenced to life imprisonment.

Josef Fritzl was born on 9 April 1935 in Amstetten, Austria. In 1956, at the age of 21, he married Rosemarie, 17, with whom he had seven children: two sons and five daughters including Elisabeth, who was born in 1966. He reportedly began abusing Elisabeth in 1977 when she was 11 years old.

After completing compulsory education at age 15, Elisabeth started a training course to become a waitress. In January 1983, she ran away from home and, together with a friend from work, went into hiding in Vienna. She was found by police within three weeks and returned to her parents. She rejoined her training course and, upon completion in mid-1984, was offered a job in the nearby city of Linz.

On 29 August 1984, her father lured her into the basement of the family home under the pretense that he needed help with carrying a door. He drugged her with ether and moved her into a small concealed underground chamber.

After Elisabeth’s disappearance, her mother filed a missing person report. Almost a month later, her father handed over a letter to the police, the first of several that Elisabeth was forced to write while in captivity. The letter was postmarked Braunau. It stated that she was staying with a friend and was tired of living with her family, warning her parents not to look for her or she would leave the country. Her father stated to police that she had most likely joined a religious sect.

Over the course of the following 24 years, Fritzl visited her in the hidden cellar on average once every three days to bring food and other supplies. After his arrest, he admitted that he repeatedly had sexual intercourse with his own daughter and had done so against her will.

Elisabeth gave birth to seven children during her captivity. One child died shortly after birth, and three – Lisa, Monika and Alexander – were removed from the cellar as infants to live with Fritzl and his wife. They adopted Lisa and became Monika’s and Alexander’s foster carers, with the knowledge of local social services authorities. Officials said that Fritzl “very plausibly” explained how three of his infant grandchildren had appeared on his doorstep. The family received regular visits from social workers, who did not hear complaints or notice anything to arouse their suspicions.

Following the birth of the fourth child in 1994, Fritzl enlarged the prison for Elisabeth and her children from 35 m2 (380 sq ft) to 55 m2 (600 sq ft). The captives had a television, radio, and video cassette player. Food could be stored in a refrigerator and cooked or heated on hot plates. Elisabeth taught the children to read and write. At times in order to punish them, Fritzl shut off the lights to the basement or refused to deliver food for several days at a time.

Fritzl told Elisabeth and the three children (Kerstin, Stefan and Felix) who remained in the cellar that they would be gassed if they tried to escape; investigators concluded that this was an empty threat to frighten the captives as there was no gas supply to the basement. Fritzl stated after his arrest that it was sufficient to tell them not to meddle with the cellar door or otherwise they would receive an electrical shock and die.

According to his sister-in-law Christine, Fritzl would go into the basement every morning at 9 o’clock, ostensibly to draw plans for machines, which he sold to firms. Often he stayed down there for the night – his wife was not even allowed to bring him coffee. A tenant, who rented a ground floor room in the house for 12 years, said he heard noises from the basement but Fritzl said it was the gas heating system.

On 19 April 2008, Kerstin, Elisabeth’s eldest daughter, fell unconscious, and Fritzl agreed to seek medical attention. Elisabeth helped Fritzl carry Kerstin out of the dungeon and saw the outside world for the first time in 24 years. She was then made to return to the dungeon where she would remain for a final week. Kerstin was taken by ambulance to a local hospital (Landesklinikum Amstetten) and admitted in serious condition with life-threatening kidney failure. Fritzl later arrived at the hospital claiming to have found a note written by Kerstin’s mother. He discussed Kerstin’s condition and the note with Dr. Albert Reiter. Medical staff found aspects of the story to be puzzling and alerted the police on 21 April, who then broadcast an appeal via public media for the missing mother to come forward and provide additional information about Kerstin’s medical history. The police then reopened the case file on missing Elisabeth. Fritzl repeated his story about Elisabeth being in a cult, and presented what, he claimed, was the “most recent letter” from her, dated January 2008. It was posted from the town of Kematen.

The police contacted Manfred Wohlfahrt, a church officer responsible for collecting information on religious cults. Wohlfahrt raised doubts about the existence of the cult. He noted that Elisabeth’s letters seemed dictated and oddly written. The news covered some of these issues and Elisabeth watched the story on the cellar television. She pleaded with her father to be taken to the hospital. On 26 April, Fritzl released Elisabeth from the cellar along with her sons Stefan and Felix, bringing them upstairs. Fritzl told his wife that Elisabeth had decided to come back after a 24-year absence. Governor Lenze told ORF that Fritzl had telephoned him and thanked him and the social services for looking after his family during his granddaughter Kerstin’s illness. Fritzl and Elisabeth went to the hospital where Kerstin was being treated on 26 April 2008. Following a tip-off from Dr. Albert Reiter, that Fritzl and Elisabeth were at the hospital, the police detained them on the hospital grounds and took them to a police station for questioning.

Elisabeth did not provide police with more details until they were able to reassure her that she would be safe from her father and her children would be looked after. Over two hours, she told the story of her 24 years in captivity. Shortly after midnight, police officers completed the three pages of minutes of the interrogation. Fritzl was arrested on suspicion of serious crimes against family members, facing possible charges of false imprisonment, rape, manslaughter by negligence, and incest. During the night of 26-27 April, Elisabeth, her children and her mother Rosemarie were taken into care.

Fritzl confessed on 28 April to having imprisoned his daughter for 24 years and having fathered her seven children. Police said Fritzl had told investigators how to enter the basement prison through a small hidden door, opened by a secret keyless entry code. Fritzl’s wife, Rosemarie, had been unaware of what had been happening to Elisabeth.

On 29 April, it was announced that DNA evidence had confirmed Fritzl as the biological father of his daughter’s children.

Fritzl’s defence lawyer, Rudolf Mayer, said that, although the DNA test proved incest, evidence was still needed for the other allegations: “The allegations of rape and enslaving people have not been proven. We need to reassess the confessions made so far.”

In their 1 May daily press conference, Austrian police said that Fritzl had forced Elisabeth to write a letter the previous year indicating that he may have been planning to release her and the children. The letter said that she wanted to come home but “it’s not possible yet”. Police believe Fritzl intended to pretend he had rescued his daughter from her fictional cult. In the same press conference, police spokesman Franz Polzer said the investigation would probably last a few months, as police planned on interviewing at least 100 people who had lived as tenants in the Fritzl apartment building in the previous 24 years.

Investigators were allowed to work in the cellar for one hour at a time, due to the lack of oxygen.

The Fritzl property in Amstetten is a building dating from around 1890 and a newer building, which was added after 1978, when Fritzl applied for a building permit for an “extension with basement”. In 1983, building inspectors visited the site and verified that the new extension had been built according to the dimensions specified on the building permit. Fritzl had illegally created additional room by excavating space for a much larger basement, concealed by walls. Around 1981 or 1982, according to his statement, he started to turn this hidden cellar into a prison cell and installed a washbasin, a toilet, a bed, a hot plate and a refrigerator. In 1993, he added more space by creating a passageway to a pre-existing basement area under the old part of the property, which only he knew of.

The concealed cellar had a 5 m (5.5 yd) long corridor, a storage area, and three small open cells, connected by narrow passageways: a basic cooking area and bathroom facilities, followed by two sleeping areas, which were equipped with two beds each. It covered an area of approximately 55 m2 (600 sq ft). The ceilings were no more than 1.70 m (5.6 ft) high.

The hidden cellar had two access points: a hinged door that weighed 500 kg (1,100 lb) which is thought to have become unusable over the years because of its weight, and a metal door, reinforced with concrete and on steel rails that weighed 300 kg (650 lb) and measured 1 m (3.3 ft) high and 60 cm (2 ft) wide. It was located behind a shelf in Fritzl’s basement workshop, protected by an electronic code entered using a remote control unit. In order to reach this door, five locking basement rooms had to be crossed. To get to the area where Elisabeth and her children were held, eight doors in total would need to be unlocked, of which two doors were additionally secured by electronic locking devices.