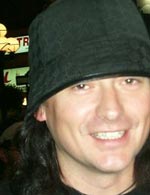 Jonas Akerlund became known world wide in 1983 as a drummer in the band Bathory. In 1998, after making the video for Madonna’s song Ray of Light, he has since worked with superstars such as Metallica and U2. In 2002 his first full length movie, Spun debuted. He first found fame as main video director for Swedish pop act Roxette.

He has directed the Mann gegen Mann video which became very controversial. The video alternates between shots of the band playing and a teeming mass of naked men, covered in what appears to be oil and writhing all over one another.