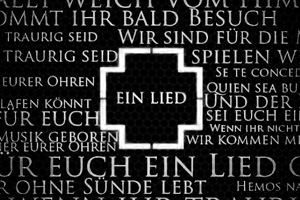 “Ein Lied” (A song) is one of Rammstein’s few slow songs, such as Nebel. It features acoustic guitars, bass, ethereal synthesizer sounds somewhere in between strings and choir, and a theremin-like keyboard lead doubled by another synthesized string part. Till’s lyrics are partly spoken and partly sung in low breathy tones. He sings “Spielen wir für euch” [We play for you]; it is a song for the fans of the band.

The song is by far Rammstein’s softest song; it has no percussion, and is sort of quiet and dreamy. The end of the song is met without much spectacle, as the keyboards die away.