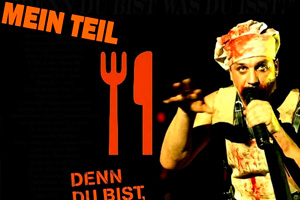 Mein Teil was inspired by the 2001 Armin Meiwes cannibalism case. The lyric was written after one of the band members brought a newspaper with the story to a rehearsal. “Mein Teil” attracted controversy in Germany, with the media dubbing it the “Kannibalensong”, and this helped to boost it to second place in the German music charts after its release in early August 2004. The song has also been remixed by Arthur Baker and Pet Shop Boys (these versions are included on the CD single).

In live performance, Till Lindemann appears dressed as a blood-stained chef holding a microphone with a large butcher’s knife attached to the end. He pulls out a giant cooking pot with a portable keyboard attached to one side. Keyboardist Christian “Flake” Lorenz appears in the pot, with metal cylinders attached to his arms and legs, and plays the keyboard during the song. After the second chorus, Till takes a flamethrower and roasts the bottom of the pot, “cooking” Flake. Flake escapes from the pot and starts running around the stage with flames erupting from his arms and legs, while chased by a knife-wielding Till.

The video shows Till eating and copulating with an angel; Flake performing ballet; Richard wrestling his twin, Oliver writhing on the floor; the whole band fighting in a mudpit; and five of the band members crawling out of a Berlin U-Bahn (subway) station while held on leashes carried by Christoph Schneider dressed as a woman. This content led to its airing on TV being restricted to after 11pm.

Leave a Reply to Linda aka Sonne Cancel reply