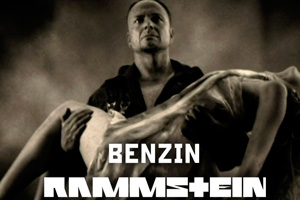 “Benzin” (The German word for Petrol, or Gasoline) was the first song to be introduced from Rosenrot. Rammstein first played “Benzin” live at Berlin’s Wuhlheide Park in June 2005. Theatrical flames shot twenty meters into the air during the live performance. Later, the song was also played at several other concerts, one of them at NÃ®mes, which is included on the band’s new live DVD Völkerball. It is the only song to have been played live to date.

Benzin can be interpreted as a political reference to the high gas prices being experienced in many countries around the world (Ich brauche Geld für Gasolin/I need money for gasoline). “Gasolin” is not actually a German word, but an English word made German. There was, however, a German chain of gas stations called “Gasolin.”

Also, bassist Oliver Riedel briefly discussed the song on Rosenrot with Kerrang!, a music magazine published in the United Kingdom, where he said “We have so much fire in our shows that we wondered if we could have some lyrics about petrol, because it’s been responsible for our success outside of Germany. It’s basically our ode to pyromania.”

The Music video depicts the majority of the band as bored firefighters who receive a call and drive an oversized firetruck, destroying everything in their path to reach one survivor – Christian Lorenz – who they totally fail to save.