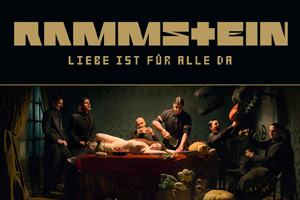 This song is about a person who is so lonely and love-deprived that he feels the need to be loved by any means necessary. The person sees a beautiful girl and wants her to love him, so he *** her. He thinks that will make her love him and now he can have love too.

It can also be about a couple that is already in a relationship or married. And the man (husband) in the relationship isn’t feeling his partner (wife) is doing her part in the relationship after all he has done when it comes to loving him as much as he loves her. So rather then cheating on her, he wants to remain faithful to his feelings and commitment to her, despite her now not loving him anymore physically making him feel cheated.

This song feels almost like a continuation of Feuer and Wasser, but it also recalls some of the same feelings as Du Reichst So Gut. Although Du Reichst doesn’t mention water directly, it does say that he touches her “wet skin”.

Another similarity between the two songs is how he tells the woman in Du Reischt not to resist and in Leibe is Fur Alle, he talks about how she doesn’t resist, even though she’s apparently crying, so whatever is happening is not something that she wants.

The water theme is all through out Feuer and Wasser as is the singer’s apparent feelings of rejection and inferiority. He is in this girl’s shadow so all he can do is clumsily reach out and grab for her with wet hands. In liebe, he’s still watching a woman, or women in the water, still feeling isolated, inferior, unlovable, but this time instead of just reaching out as the object of his desire slides past, he takes matters into his own hands and “makes” her love him.